Female Ventures is there to give support to conscious planning of women’s careers! But who are these women, what is driving them and how do they make their career choices? We kick off a series of interviews with the women of Female Ventures with Willemien van Musschenbroek Greve, former city coordinator of our Delft/The Hague team. 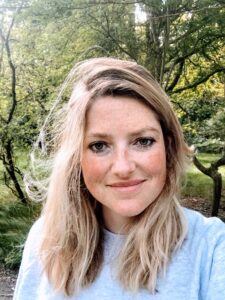 You are the new and proud owner of a business called “Spriet”. Can you tell us first what your career has been so far?

I worked at ABN AMRO (banking/ finance) for 8 years when I switched to InnovationQuarter (government) 3 years ago. My role was to attract international high tech companies to the greater Rotterdam The Hague area. I enjoyed it, forward looking, thinking in opportunities, and stimulating innovation.

But I have always been someone with many ideas. Last year, during my maternity leave I sat down and wrote down all the ideas I have had over the past years. There were quite some! But they never really made it from head to hands. I would talk about it (enthusiastically), but they all faded after a while.

What was holding you back?

Is this a good idea? Is it the right time? Am I the person to do this? Is it not out of my scope? I had very diverse ideas. Or I was pregnant (giggles).  There were always objections. But deep inside I always knew I wanted to bring one of my ideas to live. And my husband knew that too and he was supporting as long as I would focus on one good idea that he also believed could succeed.

When did you stick with one of your ideas?

I actually realized the effect nature had on my (eldest) daughter. She really likes being outside, in nature, she is curious.  Then I thought, maybe I can make discovering nature easier for other kids and their parents. This is how my business idea Spriet was born. But more important is that the whole idea made me really happy. It was close to me, to what I know, to how my life looks like in my free time. I love spending time outside and bringing my children close to nature and discover how much fun that can be.  At the same time, I realized that I know my target group very well. They are my friends, young parents with children. I know them, I know what they want and what they need. Opposed to my other ideas, this was really close to me. This idea was one I could start to work with without heavy investments and it felt very comfortable to be doing this.

Was knowing your target group what made you start this business, or the fact that you felt so passionate about it?

Over the past years I have started to become more worried about our environment and nature. What world am I leaving to my children? As people are becoming more and more disconnected from nature, what path are we on?

I feel that a fundamental first step towards a more sustainable future is to feel connected to nature.

I was wondering if I could do something about it, bring nature closer to our (city) homes, make it fun. And easy! I felt passionate about it. So, it came from both sides, the product was close to me, and I felt the urge to contribute.

How did this idea started to take form in a real business?

A friend of mine gave me the idea to start looking for subsidies. That is how I came across the The Hague Innovators Challenge. That is a yearly challenge for pre-start-ups, start-ups and scale-ups that have an impact. The deadline was in two days. I sat down and filled in the application. To my surprise in November last year I got selected as one of the finalists. That was an immense boost forward. I remember when I was there at the selection day that people were saying “you should put that on your website”. I didn’t even have a website; it was just the name and my idea on paper now. But I felt really supported by the fact that I was selected. And I felt the responsibility to really do something about it now, because others were not selected.  To be honest, there is a chance that if I wasn’t a finalist, that my idea would have died out just like my other ones. But now I got training, I had to pitch, I had to get people vote for me, to really promote it. It pushed me forward big time.

Do you think that sometimes we need someone outside of our network of family and friends who believes in us?

Yes, absolutely, a professional organisation helps. Because of The Hague Innovators Challenge I learned some skills along the way. Back then I was still an employee, and I had to learn to see myself in the role of entrepreneur. It was a big shift for me, to embrace my new identity. I felt more comfortable after the trainings they provided. Being amongst entrepreneurs is different.

How did it continue after that?

At first, I thought that the final was decisive whether I should dedicate more or less time into it. But my idea grew so much on me that I knew that I wanted to continue. I didn’t win, but I won so much by this opportunity the Innovators Challenge gave me. It brought my idea at a higher level and I saw that I could do more. Two weeks after the final in January, I quit my job. It was a gradual shift, at first I worked at InnovationQuarter for 16 hours per week in March and April in order to invest time in Spriet in the rest of the week. As of May 1st it was just Spriet and me.

And then the Corona crisis happens. How did that affect your business?

As I said, I was hoping to have more time starting with March. And I did, for the first two weeks, but then Corona happened. The kids were home all the time, my husband was working from home. It was hectic. Dividing time between me and my husband and the kids. Dividing my time between working at InnovationQuarter and Spriet. I wanted to launch my first packages first of April. I was frustrated I didn’t have the time I hoped for. I needed more time and space for my new business. For ideas, for creativity. My husband was supportive and sometimes I would just go by myself for a walk, of doing groceries alone, just to clear my head.

How did all this influence your launch?

It was actually a perfect time. People wanted to go out, parents wanted to do more nice things with the children. When I launched in April it exceeded my expectations, which was really nice. In each package there are three or four nature activities, including instructions and ingredients, so you can start right away. It was also nice to see that people were gifting it to others who they couldn’t see because of Corona. Half May I launched the second package and now I am preparing the new series for coming months.

Where did you get your inspiration for entrepreneurship from?

My husband has encouraged me to become an entrepreneur and he also understands that it takes time to set it all up. But I actually got a lot of inspiration from Female Ventures. I talked to so many female entrepreneurs there and that was very refreshing for me. To be honest, there are not many entrepreneurs amongst my friends. Talking to so many of them at the Female Ventures events, understanding their motives, challenges and drives opened a whole new world for me. It got me inspired!

That is really great to hear, that is what Female Ventures is all about, to inspire each other in our careers.

This is maybe why I subconsciously joined Female Ventures back then. I really believe in a more male-female balanced professional life and more female leading examples. I got really inspired by their stories and also seeing that they love what they are doing, can still go on holiday and sleep at night.

Do you remember any particular story that made an impression on you?

Actually that was a discussion with my team members. We were having a meeting during the summer and I shared one of my plans with them. They told me “just do it, it doesn’t have to be perfect, you don’t have to do it all at once”. They made it sound easy, like something I could do. And I believed them, because they had that experience and they were sharing that with me. I felt encouraged.

Can you tell us about your lessons learned so far?

Like I said, just start. Try. You only know if it works if you put time into it, commit to it and test it. It doesn’t help just to have an idea. You have to put it in practice. And believe in your own idea! If you don’t believe in it, why would someone else believe in it? And if after a while it doesn’t work, change direction and start something else. That is ok too. It also really helps if you surround yourself with people who can help you in the right directions.

What would you recommend the women who come to the Female Venture events?

If they are thinking about entrepreneurship, like me, find like-minded and experienced people to get inspired and just start! You find these inspiring women at Female Ventures.

If you don’t want to start a business but you might be looking for a new job, or to boost your network connections, speak up. Know what you need and ask. Make a move, don’t keep it in your head. Open up and share!

In both cases, you will really be amazed how many people are willing to help and have a coffee!

Want to get in touch with Willemien? Contact her here.

Get Inspiration Not News